20 Days Until Israel! - BETHLEHEM and CHRIST'S BIRTH - Was There Really No Room in the Inn? 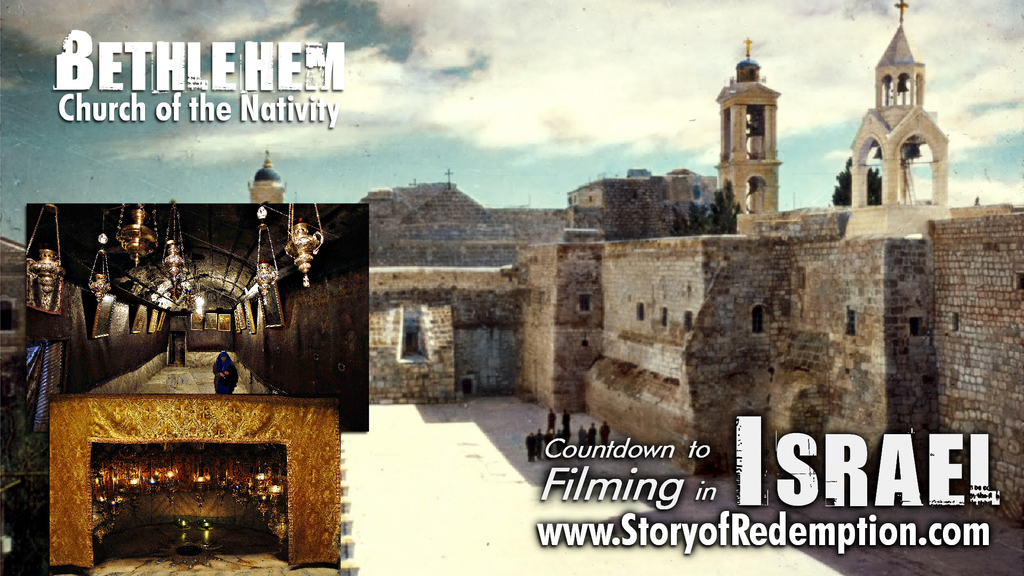 20 DAYS UNTIL STORY OF REDEMPTION IS FILMED IN ISRAEL! - BETHLEHEM AND JESUS' BIRTH - One of the places that we will go, of course, in Israel, to film the Story of Redemption is Bethlehem, which was a small village a few miles outside of Jerusalem where Jesus was born.

The Story of Redemption primarily follows Matthew's gospel, which mentions the wise men coming to see Jesus after he was born, not the shepherds (which is found in Luke's gospel); however, it would be hard to really tell the story of Christ's birth without mentioning some of Luke's account, as his account is so well known.

And here is an opportunity to possibly clear up and reconcile some of the popular misconceptions about Christ's birth. The popular image of Mary and Joseph running through Bethlehem, trying to find an open hotel room--being turned down by a cruel innkeeper--and, in despair, going to a barn to give birth to Jesus makes for dramatic Christmas pageants. However, this is almost certainly not what happened.

This understanding is based upon the King James Version's translation of Luke 2:5, saying that there was "no room in the inn." The Greek word, kataluma, can be translated in various ways, including "inn." However, it also can mean "upper room"--and indeed this was the word used to refer to where the Lord's Supper took place (in an upper room). The NIV, therefore, gives a much more likely translation - "She wrapped him in cloths and placed him in a manger, because there was no GUEST ROOM available for them (Lk. 2:5).

Still, this does not solve the mystery entirely. If there was no guest room, how did they end up in a manger? Here is where understanding buildings in the New Testament world in Judea is helpful. Most houses were build out of stone, and they often had two levels--a main level with living and guest quarters, and a lower level--often a cave--where animals would be brought inside at night. It seems likely that Joseph and Mary went to Bethlehem to stay with their relatives, but the top level, including the guest room, was crowded because of the census. So they had to stay in the lower level of the house--a cave--where the animals were kept or brought in at night.

This also helps reconcile Matthew and Luke's account, and demonstrates why typical nativity scenes of wise men and shepherds both being present at Jesus' birth may not be too far off. The shepherds came and visited Jesus when he was born, and found him lying in a manager. Matthew says that the wise men came and visited Jesus "in a house" (Mt. 2:11) after he was born. Quite possibly, this house was where the shepherds came and saw Jesus--in the lower level of the house, where the animals were kept at night.

Now, in Bethlehem, there is a church called "The Church of the Nativity" that was originally built (and then torn down and rebuilt in 565 AD) by Helena, the mother of the Roman Emperor Constantine (327-333 AD). While it cannot be known for certain where Jesus was born, the church is built over a cave, which was very much in keeping with what Justin Martyr wrote about Christ's birth.

In his Dialogue with Trypho, Justin Martyr wrote:

"Joseph took up his quarters in a certain cave near the village; and while they were there Mary brought forth the Christ and placed Him in a manger, and here the Magi who came from Arabia found Him" (chapter LXXVIII).

Whether or not the Church of the Nativity is the spot of Christ's birth, the fact that it is built over a cave is in keeping with very early church tradition, and points to a possible way to reconcile Matthew and Luke's accounts of this birth.

How do you reconcile Matthew and Luke's accounts of Christ's birth?