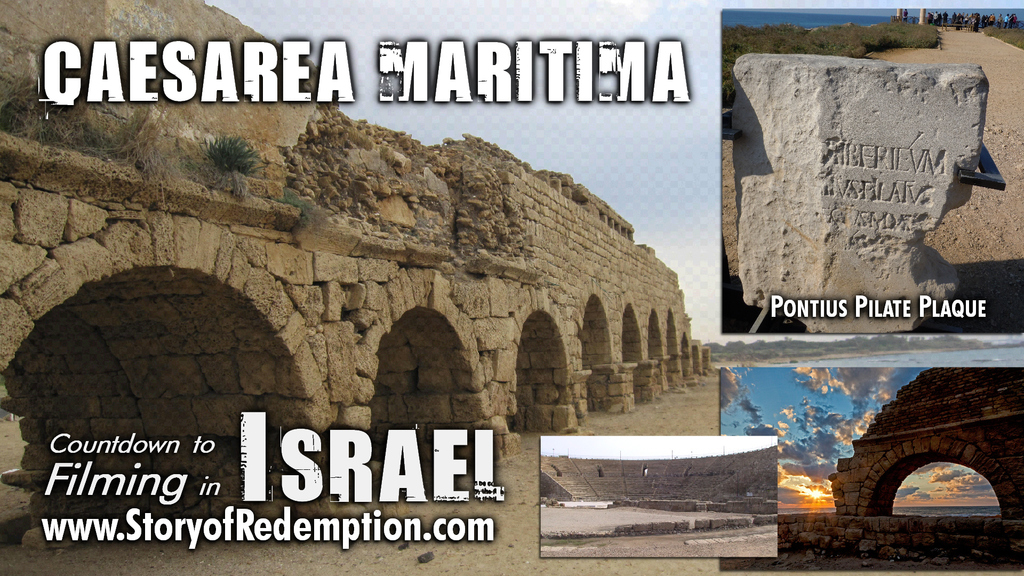 It is 26 days until the Story of Redemption is filmed in Isarel! Well, actually, it is 25 days, as it is well past 12 am. Just shows how packed the days are as we are preparing for the trip to Israel. There is so much to do!

One of the places that we will go and film is at Caesarea Maritima, Caesarea by the sea. This beautiful city on the beach was built by Herod the Great and named in honor of Augustus Caesar, who had given Herod his power and throne.

In Caesarea, the "Pilate Stone" was found--a stone which referred to "Pontius Pilate," the governor under whom Jesus was crucified. This was significant because it was the first extrabiblical reference to Pontius Pilate, which shows yet again the accuracy of the Bible in naming people and places.

Note this Wikipedia article on the Pilate Stone:

The Pilate stone is a damaged block (82 cm x 65 cm) of carved limestone with a partially intact inscription attributed to, and mentioning, Pontius Pilate, a prefect of the Roman province of Judaea from AD 26–36. It was discovered at the archaeological site of Caesarea Maritima in 1961. The arctifact is particularly significant because it is the only widely accepted[not in citation given] archaeological find, to date, of an authentic 1st-century Roman inscription mentioning the name "Pontius Pilatus". It is contemporary to Pilate's lifetime, and accords with what is known of his reported career.[2][3] In effect, the writing constitutes the earliest surviving record and only contemporaneous evidence for the historical existence of this person; otherwise known only from the New Testament and brief mentions in retrospective Roman histories, which have themselves survived only in still-later copies.

It is likely that Pontius Pilate made his base at Caesarea Maritima, a city that had replaced Jerusalem since AD 6 as the administrative capital and military headquarters of the province,[4] and the site where the stone was discovered. Pilate probably travelled to Jerusalem, the central city of the province's Jewish population, only as often as necessary.[5]

The Pilate stone is currently located at the Israel Museum in Jerusalem.[6][7] Replica castings can be found at the Archaeological Museum in Milan, Italy, and on display in Caesarea Maritima itself.

Another great archaeological site in Caesarea is a Roman amphitheater. Josephus, a Jewish historian, mentions this in his account of the death of King Herod Agrippa: 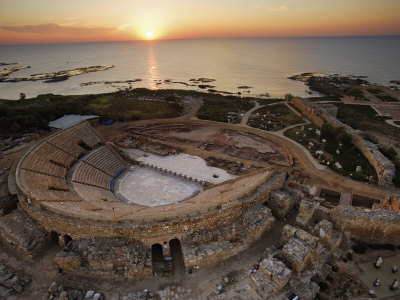 "Now when Agrippa had reigned three years over all Judea, he came to the city Caesarea [...] There he exhibited shows in honor of the emperor [...] On the second day of the festival, Herod put on a garment made wholly of silver, and of a truly wonderful contexture, and came into the theater early in the morning; at which time the silver of his garment was illuminated by the fresh reflection of the sun's rays upon it. It shone out after a surprising manner, and was so resplendent as to spread a horror over those that looked intently upon him. At that moment, his flatterers cried out [...] that he was a god; and they added, 'Be thou merciful to us; for although we have hitherto reverenced thee only as a man, yet shall we henceforth own thee as superior to mortal nature.'

What do you think of the Pontinus Pilate finding?