9 Days Until Israel! - Sea of Galilee--Where Jesus Calls His Disciples 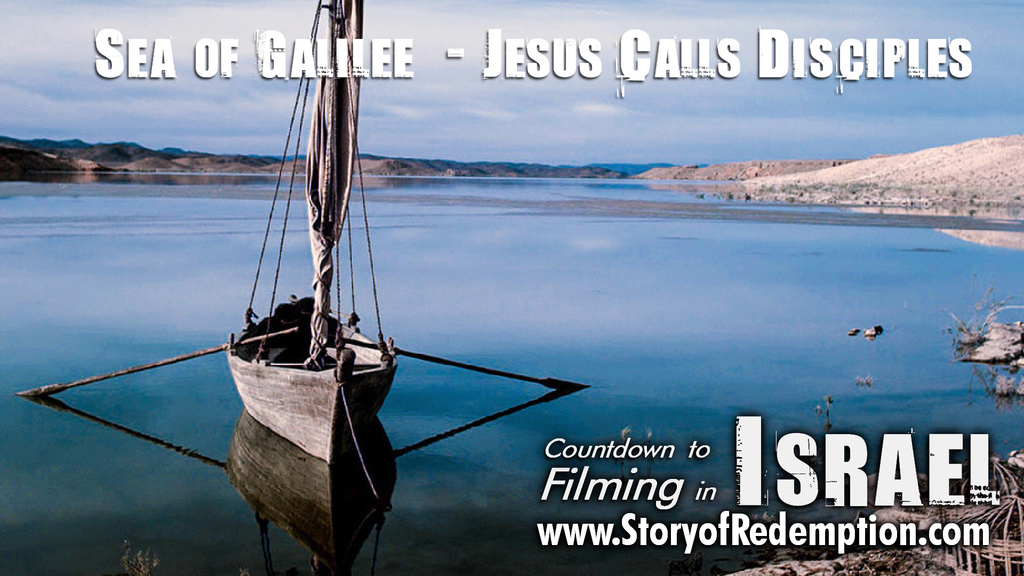 9 DAYS UNTIL FILMING IN ISRAEL! - SEA OF GALILEE! - As the above video shows, we all follow someone or something, whether we acknowledge it or not. Lesson 5 in the Story of Redemption is about discipleship, or following Jesus. In Jesus' day, a disciple was a follower, one who would attach himself to a Jewish rabbi, who would teach him how to live out the teachings of the Scriptures. And Matthew records how Jesus, at age 30 thirty--the age that a disciple could become a rabbi and teach others--began to call his disciples and began his ministry.

18 As Jesus was walking beside the Sea of Galilee, he saw two brothers, Simon called Peter and his brother Andrew. They were casting a net into the lake, for they were fishermen. 19 “Come, follow me,” Jesus said, “and I will send you out to fish for people.” 20 At once they left their nets and followed him.

21 Going on from there, he saw two other brothers, James son of Zebedee and his brother John. They were in a boat with their father Zebedee, preparing their nets. Jesus called them, 22 and immediately they left the boat and their father and followed him (Mt. 4:18-22).

When Jesus comes calling, Simon Peter, Andrew, James, and John do not hesitate. “Immediately” and “at once” they leave their nets, their boats, and their livelihood to follow Jesus. Seems pretty radical. What explains this response?

Well, most every Jewish boy grew up wanting to be a rabbi. Note the following:

In Jewish, society young boys (and in the early years, girls) grew up going to "Bet Sefer or House of the Book, a Jewish equivalent of primary school for those who were 6 to 10 years old. From the ages of 6 to 10, education focused on one thing: memorizing the Torah— Genesis, Exodus, Leviticus, Numbers, and Deuteronomy. For people in an oral culture, memorization was much easier. Humans still have this ability today—we just choose to memorize different subjects, the lines from popular movies and songs, for example. At the end of Bet Sefer, only the best of the best students would continue their education.

Those who were the best at memorizing would go on to Bet Talmud or House of Learning from the ages of 10 to 14. Here, they would focus on memorizing the rest of the Jewish Scriptures. In fact, there are still Jewish men and women who do this today.

If you were the best of the best at the end of Bet Talmud, you would present yourself to a Rabbi and enter Bet Midrash. The students here would be elite students similar to Ivy League students today. The rabbi would ask you questions to see if you were really the best of the best. This was extremely important for  the rabbi. Rabbis had a particular way of interpreting and teaching of the Scriptures called their 'yoke.; Jesus refers to this in the Gospels when he says, 'My yoke is easy and my burden is light.'

In order to spread this yoke, the rabbi would want only the best disciples. He would ask them questions like, 'How many times does the word well appear in the book of Genesis?; or, 'How many times does Habakkuk reference Deuteronomy 17?; Off the top of their heads, the disciples would recall the memorized words and count them. These were the law school or GMAT questions of their day. If the rabbi believed that you had what it takes, he would say the two words in Hebrew every disciple would want to hear, 'Lek Hackeri'—'Come follow me.' Upon hearing these words, the disciple would leave his family and his village and follow the rabbi wherever he went.

A blessing developed: 'May you be covered in the dust of your rabbi.' The hope is that the disciple would follow behind the rabbi so closely behind that the dust from the rabbi’s sandals would cover him. If the rabbi prayed a certain way, then the disciple also prayed that way. If a rabbi told a certain story, then you learned how to tell the story. If the rabbi ate a certain way, well, you get the picture. Now, if you didn’t have what it takes, the rabbi would say: 'You know the Torah well, but you don’t have what it takes. Go back to your village. Go and make babies and hope they become rabbis. Go and ply your trade.'"

Now, there was something else that was significant in those whom the rabbi called. One of the things in this call that the rabbi was evaluating was, Can this student truly take on my teachings, live them out, and become like me? And if he chose a disciple, he was saying not just, you got the best grades, or knew the Torah. He was saying, I think that you can be this type of person. It was an incredibly high honor.

Now, by virtue of being full time fishermen at that age, Peter and Andrew, James and John are not the best of the best. They had, so to speak, flunked out of rabbi training school. So when Jesus, a recognized rabbi, comes along and asks Peter, Andrew, James and John to be his disciples--telling them that he thinks the world of them and that he thinks that they can become like him--they jump at the chance. Later, Jesus would call Matthew, a tax collector--a profession viewed to be enemy sympathizers and lumped in with "sinners"--at his tax booth right here on this same shore (Mt. 10:9-13). Matthew and others would jump at this chance as well. And in this Jesus drew together men, women, rich, poor, fishermen, tax collectors, zealots, Pharisees--people from all walks of life. Through this, Jesus created a type of new community---a loving, serving community centered around him.

Now Jesus said that his "yoke" was light (Mt. 11:28-30). Unlike a lot of other rabbis, his teaching was not burdensome, but a joy. Not legalistic. Not just a bunch of rules. Jesus said,

Frankly, unfortunately, many of Jesus' followers today do not get this, and have once again burdened people with a legalistic, soul sucking "religion," which is not very appealing.

Rather than a bunch of heartless rules, Jesus summarized the entire law in this: love God, love people (your neighbor as yourselves). Also inherent within that call to follow Jesus was a call to make other disciples of people--to become fishers of people. This is what the early church did (How Did the Early Church Grow?), which caused them to become a light to the (Mt. 5:15-16) and what has an impact upon people today (Truly Loving Your Neighbor - Story from Rwanda).

Like these fishermen, we ought to make following Jesus and reaching out to others our hearts’ desire. We must be willing to leave everything behind, including our jobs, our hobbies, our entertainment, and even our family, for the chance to follow him and sharing him with others. Following Jesus is an incredible spiritual journey in which we are joined together with other Christ-followers, forming a new Christ-centered community on mission for God.

What implications does Jesus’ choosing of ordinary people to be his disciples have for us? What does it say that he thinks that we can become like him? Why is it important to be a part of a Christian community when seeking to be a disciple of Christ, and not just follow Jesus on our own? How can we be "fishers of people" today?