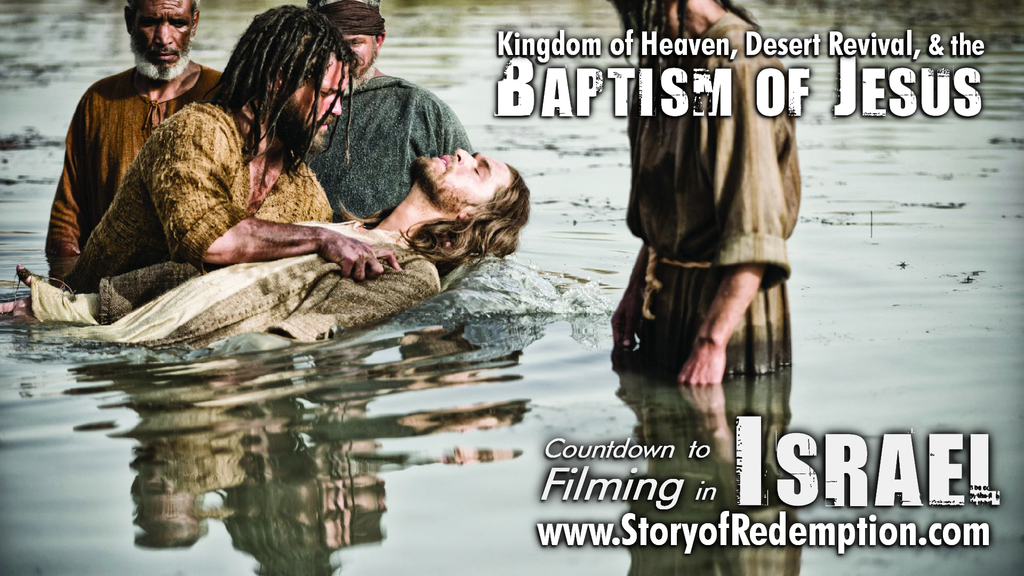 14 DAYS UNTIL FILMING IN ISRAEL! - JORDAN RIVER - The birth of Jesus the Messiah was the most dramatic entry of God into human history, and it signaled to the world that a new age had begun, with Christ as king. This new Messianic age is a dramatic in breaking of the kingdom of God, also referred to in Matthew as the kingdom of heaven. The Jews at that time were looking for a physical kingdom and an earthly king. But the kingdom of heaven is a Spiritual kingdom, the realm in which God’s will is done. In fact, Jesus would later teach his disciples to pray, “Your kingdom come, your will be done.” Thus, the kingdom of God is about God’s rule or reign over our hearts and our lives and over all of creation - a spiritual kingdom which consists of “righteousness, peace and joy in the Holy Spirit” (Romans 14:16). God has always been ruling, but this rule became more visible through the birth, life, miracles, and ministry of Jesus, who submitted himself to God and let God rein over him.

Now we are not too familiar with kings and kingdoms, and so kings and the term “kingdom of God” may not resonate as much with us, but it did to the people in the first century. In the larger Greco-Roman world, they were always looking for signs of divine favor upon a king or ruler, which is likely why Matthew records all of the incredible events surrounding Christ’s birth, such as the wise men coming from the East, the appearance of a star to guide them, even Herod’s attempt to kill the child. All of these would have been seen as signs of a new, divinely appointed king to the people of that time.

In fact the word "gospel" comes from the word "euangelion," from which we get the word evangelism. It was originally taken the proclamations that were sent out at that time to proclaim the good news of the birth of the Roman emperors, beginning with Caesar Augustus who, as Luke records, was emperor when Jesus was born.

Note this quote from the Roman writer Virgil's work, Aeneid, in which he speaks of the reign or rule of Augustus Caesar:

The "Priene Inscription" contains a letter from the Roman proconsul and the response of Roman cities in which the birthday of the "godlike" Augustus Caesar, Son of God, was said to be so significant that the calendar needed to be reconfigured and begun again at 9 BCE.

". . . the birthday of the very divine Caesar . . . we may rightly take as equal to the foundation of everything . . . there was nothing that was not crumbling and changed into ruin, he restored to proper form, in another way he gave a facelift to all the world though it would have blithely accepted destruction if the general blessing of all, Caesar, had not been born. So one may rightly take this day as the time when the beginning of existence and of life has come to be . . .  it seems to me that the birthday of the most godlike Caesar should be held by all the citizens to be [like this]. Reasoner, Mark (2013-11-01). Roman Imperial Texts: A Sourcebook (Kindle Locations 568-572, 577-578). Fortress Press. Kindle Edition.

Probably the most commonly noted text in this inscription says,

" . . . Augustus, whom virtue has filled for the benefit of humankind, while graciously giving us and those after us a Savior who has ended war, setting things right in peace, and since Caesar when revealed surpassed the hopes of all who had anticipated the good news,[ 39] not only going beyond the benefits of those who had preceded him, but rather leaving no hope of surpassing him for those who will come, because of him the birthday of God began good news for the world." Reasoner, Mark (2013-11-01). Roman Imperial Texts: A Sourcebook (Kindle Locations 588-592). Fortress Press. Kindle Edition.

In his gospel, Luke very clearly showed how Jesus was the true Savior and good news of the world, who brought peace.

Now there are four gospels, Matthew, Mark, Luke, and John. Matthew and Luke begin with the birth accounts of Jesus, and we see they are about establishing Jesus as a different type of king. John’s gospel also speaks of Jesus coming into the world as a theological, Greek concept, of the “Word,” who was with God and was God, becoming flesh and dwelling among us. But Mark’s gospel—which begins with the “good news of Jesus Christ,” begins someplace else—the very place that we come to now in Matthew 3, with John the Baptist preaching out in the desert about the coming Kingdom of God, preparing the way for the Lord. Why is this? And why was this good news?

Well, you have to understand that for all of the Roman propaganda about how great things were under Augustus Caesar, or Emperor Tiberius after him, or more immediately under King Herod the Great or his son Herod Antipater after him, life in first century Judea was incredibly hard. There were crippling taxes to pay for Herod’s building programs. Food was hard to come by. The Roman governor Pilate was brutal in putting down rebellions. Corruption was everywhere, including the priesthood. There had not been a recognized prophet in the world for 400 years as the Jews had been ruled over by empire after empire, and a lot of people gave up and turned away from God.

Entering into this time was John the Baptist, who was a relative about the same age as Jesus, talking about this kingdom, and calling people back to God:

1 In those days John the Baptist came, preaching in the Desert of Judea 2 and saying, “Repent, for the kingdom of heaven has come near.” 3 This is he who was spoken of through the prophet Isaiah:
“A voice of one calling in the wilderness, ‘Prepare the way for the Lord, make straight paths for him’” . . . 5 People went out to him from Jerusalem and all Judea and the whole region of the Jordan. 6 Confessing their sins, they were baptized by him in the Jordan River (Mt. 3:1-6).

John was the first recognized prophet in 400 years. He intentionally dressed, ate, and preached in a way that evoked images of the prophet Elijah, who called the people back to God. He baptized on the East side of the Jordan, at the same place where centuries before, Joshua/Jesus had led the Israelites into the Promised Land, which was on the West bank. That actually was dangerous for him personally, for Herod Antipas controlled that side of the river, and John would challenge him about his taking his brother’s wife and eventually be killed for this. But in a powerful way, John was telling the people that if they wanted to entered into the Promised Land / the Kingdom of Heaven, they had to change.

John the Baptist tells the people that God’s kingdom is near or at hand. To be a part of this kingdom, they needed to:

Jesus of course would come along and be baptized by John the Baptist—something which John at first objected to. Jesus had no sins that he needed to be forgiven for. But he still had to submit his will to God, lay down his own desires, and become the type of suffering Messiah that God called him to be. He still needed the Spirit to help him in his ministry. And when Jesus took this step and was baptized, the heavens opened up and God said, “This is my Son, whom I love, and with whom I am well pleased.”

On our trip to Israel, we will go to the Jordan River and to “Bethany Beyond the Jordan,” the proposed site for Jesus’ baptism. Should be great!

How would you describe the concept of the kingdom of heaven?