Only 13 Days Until Israel! - Jesus and the Mount of Temptation 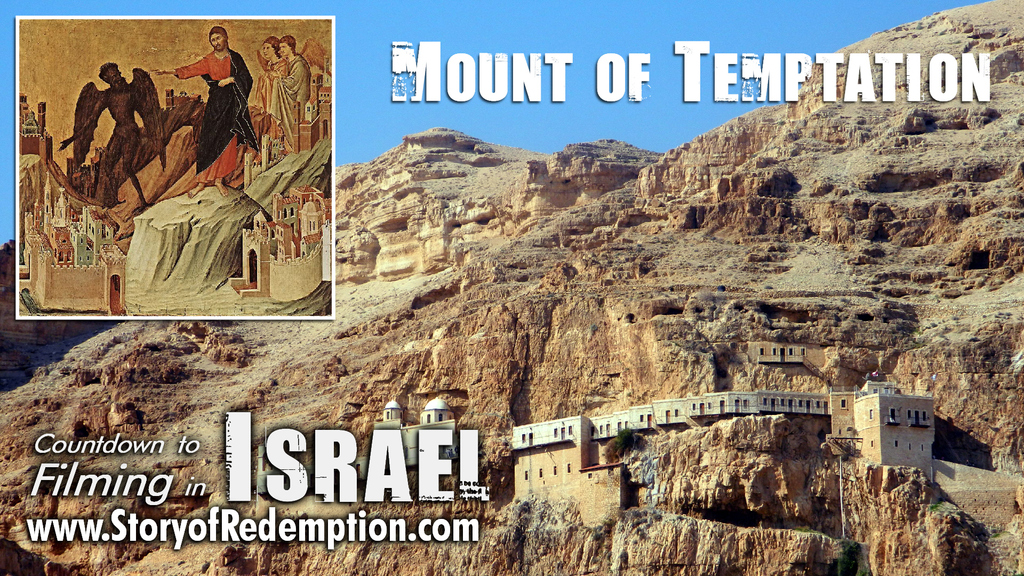 ONLY 13 DAYS UNTIL FILMING IN ISRAEL! - MOUNT OF TEMPTATION

Matthew tells us that after Jesus was baptized, he was led out into the wilderness by the Spirit to be tempted by the devil. In the church, the "Monastery of the Temptation," a Greek Orthodox church on the proposed "Mount of Temptation" where Jesus faced these temptations, there is some vivid artwork (see picture above) of Jesus resisting this temptation. Temptation is difficult to resist, and In looking at some of this artwork, I am reminded of the story, The Forger Who Fooled the World.

Han van Meegeren was an artist in the Netherlands painting before the time of World War II, and his critics ruthlessly made fun of his paitings.. One critic described him as “A gifted technician who has made a sort of composite facsimile of the Renaissance school, he has every virtue except originality.” So van Meegreen plotted his revenge.

His plan was to paint a painting using the style of a well known, great Artist from the Renaissance time periord (Johannes Vermeer), but to create an "original work," forget that artist's signature, and pass it off as a newly discovered work. He would present his "discovery" to his art critics, they would accept it, and then he would unveil his frogery and they would be embarrassed. He tried it, painting a painting in that style, titling it "The Supper at Emmaus," and sure enough, it worked. The painting was accepted as newly discovered work--and it sold for the equivalent of millions of dollars today and was prominently displayed at a major art gallery.

Han van Meegren had planned to expose the forgery at the opening of this art gallery. But he got n greedy. Rather than expose the forgery, he made more and more, making nearly 60 million dollars. He became addicted to alcohol and morphine and was unfaithful to his wife. His forgeries got worse and worse, but they kept being accepted and bought. And in the ultimate irony, when the Nazis began invading Europe, he sold The Supper at Emmaus to them.

While in prison, he decided to confess. However, to his great surprise, no one believed him. One of the prison officers said that if van Meegeren had painted those paintings, he could paint a copy from memory. Van Meegeren arrogantly said. "To paint a copy is no proof of artistic talent. In all my career I have never painted a copy! But I shall paint you a new Vermeer. I shall paint you a masterpiece."

And so, surrounded by reporters and court-appointed witnesses, and supplied with plenty of alcohol and morphine, he worked for six weeks to pain one last "Vermeer", in a desperate attempt to prove what a great painter he was and find himself guilty . . . "

From this confession and trial, van Meegeren finally got the fame and recognition that he craved, and he got his wish: he was declared guilty of painting the paintings and being a forger and sentenced to a year in prison. But he was hospitalized the day he was scheduled to begin his sentence, and he died a few weeks later.

These correspond to both the “the lust of the flesh, the lust of the eyes, and the pride of life,” as well as to the temptations that Adam and Eve faced—and failed in the garden.

The fruit was “good for food” = the lust of the flesh.

The fruit was “pleasant to the eyes” = the lust of the eyes. •

The fruit was “desirable to make one wise” = the pride of life.

For Jesus, these temptations were really about what type of Messiah he was going to be. Was he going to a Messiah that used his miracles for his own benefit, his status to force God’s hand, or who shortcut it all and just went for all that he could see now? Or was he going to be the Messiah that God called him to be—the suffering servant.

Fortunately, Jesus resisted these temptations, unlike Adam and Eve, and unlike Israel in the desert. He never sinned, but because he faced temptation, he understands when we do. Aren’t you glad?

Jesus overcame Satan and temptation by the same way that we must--by quoting Scripture, through the Spirit, through his Spiritual disciples. And after he resisted Satan, Satan fled him, and angels attended him--just like they had Elijah when he was in the desert, facing temptation (2 Kings 19).

What do you learn about temptation from this story?