Only 6 Days Until Israel! - Caesarea Philippi - Who Do You Say Jesus Is? 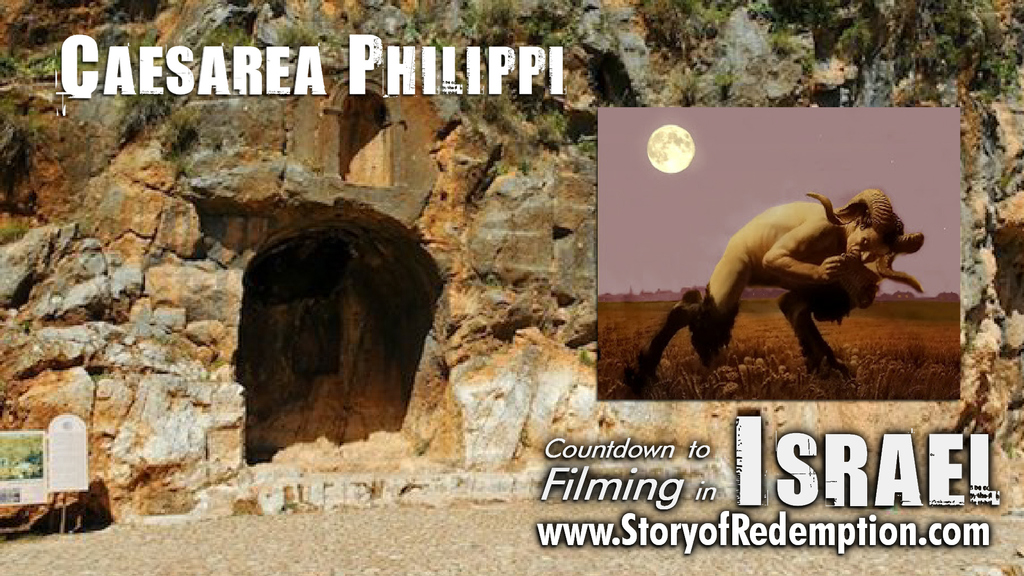 Jesus went around the countryside, preaching, teaching, healing, and casting out demons for three and a half years. But eventually he knew that he had to go into Jerusalem, to confront the corrupt religious leaders, and to die. Not just die, but be betrayed, mocked, beaten, and brutally killed, or crucified naked upon a cross--branded a criminal, a failed leader, and a fraud.

Now, why would Jesus do this? Why did he have to die--particularly in this way--if he is God? As we will see, Christ's death, is fundamental to who Jesus is, and tells us the type of God that God is as well.

Three times on the way to Jerusalem, Jesus predicted his death. The first time was in Caesarea Philippi. But prior to this first prediction, Jesus had a question for his disciples: Who do people say that I am?

13 When Jesus came to the region of Caesarea Philippi, he asked his disciples, “Who do people say the Son of Man is?”

14 They replied, “Some say John the Baptist; others say Elijah; and still others, Jeremiah or one of the prophets.”

16 Simon Peter answered, “You are the Messiah, the Son of the living God.”

17 Jesus replied, “Blessed are you, Simon son of Jonah, for this was not revealed to you by flesh and blood, but by my Father in heaven. 18 And I tell you that you are Peter, and on this rock I will build my church, and the gates of Hades will not overcome it.

Caesarea Philippi was an interesting place for Jesus to ask this question. Caesarea Philippi was named by Philip the Tetrarch after Caesar and himself. It would be like today naming a place Presidenterae Jameseri. It was a place dedicated to the worship of the pagan god of nature, Pan, who was thought to inhabit this cave, where water flowed out and formed the Jordan River. Thus it would have been viewed as a place of pagan power.

And here he asks his disciples who people say he is. Some say John the Baptist, who was beheaded by Herod Antipas--some thought he was John the Baptist come back to life. Some said Elijah, who was prophesied to come again before the Messiah. Some said a prophet, like Jeremiah (prophet of doom). Quite a range of responses.

And if you were to ask people who Jesus was today, you would still get a lot of different responses, as this "People on the Street" video shows.

Some different ideas that people have today about Jesus, including:

Finally Jesus said, Who do you say I am? And Peter said, You are the CHRIST, the MESSIAH, the SON OF THE LIVING GOD! God himself, come to this earth, in human form--king and ruler of the universe. And Jesus said that Peter did not come up with this on his own, but that he cheated--God helped him.

And he said to Simon--which means shifting sand--that he will be called Peter--which means rock--and on the rock of this truth he would build his church. And the "gates of hades" would not stand against it. I used to think this was saying that these gates would not be able to overcome, no matter how hard they tried. But a gate is a defensive structure. What Jesus is saying is that Satan will not be able to stand against this powerful truth that was being revealed, that Jesus was the MESSIAH, the king, come into the world! You see, I like that idea. Buddies are nice. But I want someone who can take the gates of hell and rip them up and cast them aside on my side! That's who Jesus is to me--what about you?

Matthew 5:21f
21 From that time on Jesus began to explain to his disciples that he must go to Jerusalem and suffer many things at the hands of the elders, the chief priests and the teachers of the law, and that he must be killed and on the third day be raised to life.

22 Peter took him aside and began to rebuke him. “Never, Lord!” he said. “This shall never happen to you!”

Now after this, Jesus tells his disciples that he has to go into Jerusalem to be killed. And you can see why this would throw his disciples for a loop. They were ready to charge, kick out the Romans, and put Jesus on the throne. And when Peter hears this, he takes Jesus aside and rebukes him--don't you see, you're the Messiah--you aren't supposed to die! And then Jesus rebukes him, and says,

23 Jesus turned and said to Peter, “Get behind me, Satan! You are a stumbling block to me; you do not have in mind the concerns of God, but merely human concerns.

24 Then Jesus said to his disciples, “Whoever wants to be my disciple must deny themselves and take up their cross and follow me. 25 For whoever wants to save their life will lose it, but whoever loses their life for me will find it.

The second time that Jesus tells the disciples that he is going to Jerusalem to die, they are understandably sad.

After the third time, the mother of James and John comes to Jesus with her sons to ask for a favor--to let her sons sit at the right and left hands of power in his kingdom. This makes all of the other "indignant." So . . .

25 Jesus called them together and said, “You know that the rulers of the Gentiles lord it over them, and their high officials exercise authority over them. 26 Not so with you. Instead, whoever wants to become great among you must be your servant, 27 and whoever wants to be first must be your slave— 28 just as the Son of Man did not come to be served, but to serve, and to give his life as a ransom for many" (20:25f).

At the heart of Messiahship, kingship, leadership in the kingdom of God, is redemptive service. Jesus died to set us free from sin and its slavery--including self-centeredness and addiction, hurt and pain. And he showed us the pathway to true greatness and happiness in life--redemptive service and dedication to others. When we do these things, we become like God. Here is a story that illustrates this.

Solomon Rosenberg, his wife, his two sons, and his mother and father were arrested and placed in a Nazi concentration camp during the Holocaust of WWII. It was a labor camp and the rules were simple: As long as you can do your work, you are permitted to live. When you become too weak to do your work, then you will be exterminated.

Rosenberg watched his mother and father being marched off to their deaths when they became too weak to work. He knew that his youngest son, David, would be next because David had always been a frail child. Every evening when Rosenberg came back into the barracks after his hours of labor, he would search for the faces of his family. When he found them, they would huddle together, embrace one another, and thank God for another day of life.

One day Rosenberg came back, but he didn't see those familiar faces. He finally discovered his oldest son, Joshua, in a corner, huddled, weeping, and praying. He said, "Josh, tell me it's not true." Joshua turned and said, "It is true, Poppa. Today David was not strong enough to do his work, so they came for him."

"But where is your mother?" asked Mr. Rosenberg.

"Oh Poppa," he exclaimed. "When they came for David, he was afraid and he was crying. Momma said, ‘There is nothing to be afraid of, David,' and then she took his hand and went with him."

Who do you think that Jesus is?