ONLY 3 DAYS UNTIL ISRAEL! - The TEMPLE MODEL in ISRAEL MUSEUM! - The second temple was enlarged by King Herod, who took the original mountain that the temple was on, built it up with dirt, and built retaining walls to enlarge the area into a huge platform--24 football fields worth, making it the largest man made platform the world has ever seen. Then he enlarged the temple itself, and covered it with gold, making it one of the great architectural wonders of the ancient world. A fantastic 1:50 scale model of the Second Temple is found today in the Israel Museum, which we will film.

Note this article on King Herod's Temple and its massive scale:

Why did [King Herod] make the Temple Mount so large?

There's no question that Herod had a huge ego and liked to impress people with grandiose building projects. But there is also another more practical reason. Historians estimate that there were about 6-7 million Jews living in the Roman Empire (plus another 1 million in Persia), many of whom would come to Jerusalem for the three pilgrimage festivals: Passover, Shavuot and Sukkot. So you had to have a huge space to accommodate such a huge number of people. Hence the size of the platform.

When it came to building the Temple itself on top of this platform, Herod truly outdid himself, and even the Talmud acknowledges that the end-result was spectacular. "He who has not seen Herod's building, has never in his life seen a truly grand building." (Talmud-Bava Basra 4a)

The Holy of Holies was covered in gold; the walls and columns of the other buildings were of white marble; the floors were of carrara marble, its blue tinge giving the impression of a moving sea of water; the curtains were tapestries of blue, white, scarlet and purple thread, depicting, according to Josephus, "the whole vista of the heavens."

Josephus describes how incredible it looked:

Viewed from without, the Sanctuary had everything that could amaze either mind or eyes. Overlaid all round with stout plates of gold, the first rays of the sun it reflected so fierce a blaze of fire that those who endeavored to look at it were forced to turn away as if they had looked straight at the sun. To strangers as they approached it seemed in the distance like a mountain covered with snow; for any part not covered with gold was dazzling white... (The Jewish War, p. 304)

Herod saw fit however, to place at the main entrance a huge Roman eagle, which the pious Jews saw as a sacrilege. A group of Torah students promptly smashed this emblem of idolatry and oppression, but Herod had them hunted down, dragged in chains to his residence in Jericho, where they were burned alive.

Having built the Temple, Herod took pains to make sure it would be run without future problems of this kind. He appointed his own High Priest, having by then put to death forty-six leading members of the Sanhedrin, the rabbinical court.

When the Romans came in to destroy Jerusalem in 70 C.E., they totally destroyed the temple, as Jesus had predicted (Mt. 24:2). However, part of the retaining wall remained, which is the Western Wall, or Wailing where Jews still gather around to pray today. 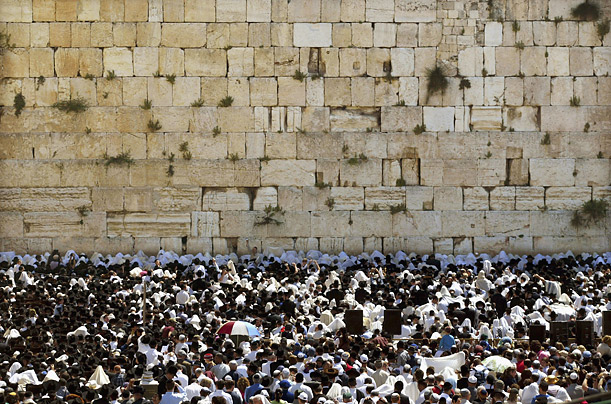 JESUS GOES TO THE TEMPLE.
Upon entering Jerusalem in the "Triumphant Entry" (Mt. 21), Jesus goes to the temple. As the Messiah, he was a priest as well as a king, and the temple was the dwelling place of his heavenly father. This entrance would mark the beginning of a dramatic confrontation with the religious authorities who ran the temple. Jesus does the following:

Matthew says that "45 When the chief priests and the Pharisees heard Jesus’ parables, they knew he was talking about them. 46 They looked for a way to arrest him, but they were afraid of the crowd because the people held that he was a prophet" (Mt. 21:45-46). Hostilities would just grow.

All of the religious leaders come after Jesus, trying to trip him up with questions. The Pharisees and the Herodians ask him whether they ought to pay taxes--never a popular subject, and something that funded all of Herod's building projects. The Pharisees ask tricky hypothetical questions about the resurrection. The experts in the law asked him what the greatest command was. And in every case, Jesus had an answer. And then he asked them questions that they could not answer, making them look foolish and showing Jesus to be the superior teacher so that "no one dared to ask him anymore questions" (Mt. 22:46).

Then Jesus just goes off on the teachers of the law and the Pharisees, calling them hypocrites and a "brood of vipers"--a bunch of snakes--doing his best John the Baptist imitation (Mt. 23). Then feeling particularly prophetic, he said to his disciples, who were gawking at the buildings, 2 “Do you see all these things?” he asked. “Truly I tell you, not one stone here will be left on another; every one will be thrown down" (Mt. 25:2).

Now this must have been shocking, because these stones were absolutely huge and went up 9 stories high! They had taken years to build, and Jesus said that they would all be torn down. The disciples, of course, want to know when this would be. And Jesus tells them several things to watch for in the destruction of Jerusalem that would happen in 70 C.E. It would be a destruction so bad that it was as if the world were ending. But Jesus said the actual time of the end of the world and his second coming, no one knows--not even himself--but only God the father. He just says, be ready for this ready.

When Jesus had finished saying all these things, he said to his disciples, 2 “As you know, the Passover is two days away—and the Son of Man will be handed over to be crucified.”

3 Then the chief priests and the elders of the people assembled in the palace of the high priest, whose name was Caiaphas, 4 and they schemed to arrest Jesus secretly and kill him" (Mt. 26:1-3).

They would soon have a chance to arrest and kill Jesus due to the betrayal by one of Jesus' own disciples (Mt. 26:14f).

The events at the temple all led up to Jesus' death.

Which of the above actions by Jesus do you think would have most angered the religious leaders? What can we learn about God's values from Jesus' actions in the temple?